Late in September, the STRIPES crew visited the horse stables on 40th Street near Belmont Academy Charter School. We visited because we were studying how using land can be empowering, and STRIPES is all about connecting classroom ideas to the real world. The stables, also known as the Dream Team Horsemanship Outreach (DTHO) program, are empowering because they can offer people something they’ve never experienced before and teach people things they’ve never been taught before. They are putting the land to good use and benefiting the community. Our visit showed how different species (humans and horses) and things (manure and hay) interact with each other. 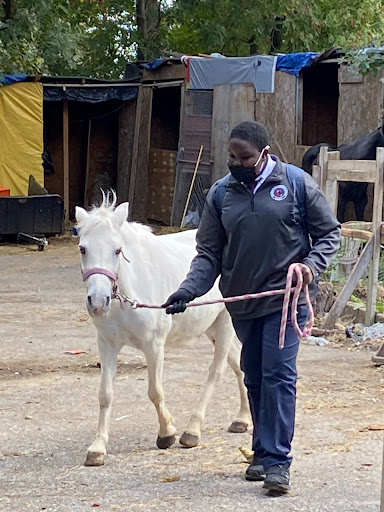 When we first arrived, I was like, “What is this hole in the wall?” What I saw inside was a lot of horses (pun intended). We were greeted by Ms. Jennifer Rodriguez, a member of DTHO and our point person for the visit. I was also impressed by the chemistry of the team members and how flawlessly they worked together. 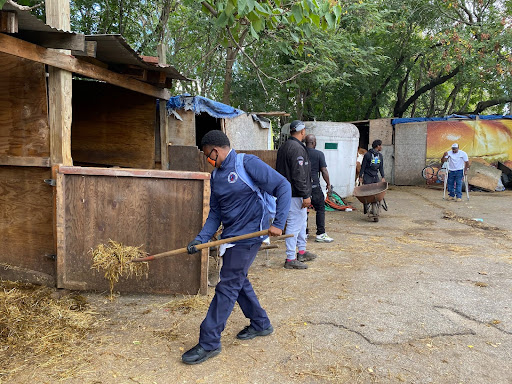 We started with a tour of the site. “What surprised me the most was where it was — when I heard we were going to horse stables, I was imagining something more magical,” admits Archer, another STRIPES student. “It was more rustic and urban than I anticipated.” The stables are located in an empty lot. There is a place for Sugar the pony in the front, then there are about 9-10 more horses in the back. There was a fenced area for training the horses but there weren’t any horses in it that day; they were resting in the stables. You would also see some people cleaning the stables and working on other equipment. 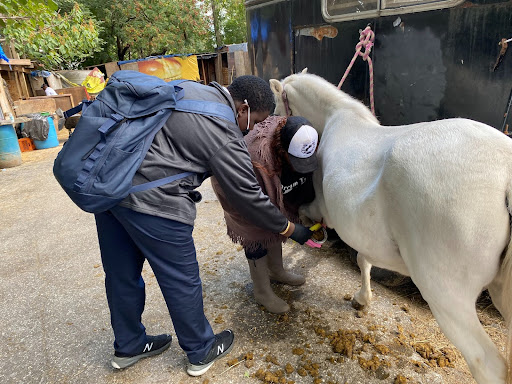 First we met the horses and the the team that maintains them. Then we learned about the daily tasks that are needed to maintain the site. These include feeding the horses, mucking the stalls, and cleaning their hooves (see photos). Ms. Rodriguez had us try it all, and that was a good experience for me because I’ve never done anything like this before. Finally, before we left, we learned how to walk a horse (see photos). To be honest, I was terrified. I thought that Sugar would start running off and I would embarrass myself. Fortunately, that didn’t happen and the experience was actually comforting. Sugar walked at the same pace as I did. It was nice when I told her to stop by saying “Halt,” she really stopped. Saleem, another STRIPES student, agrees, noting it was surprising that Sugar responded to commands as well as she did. 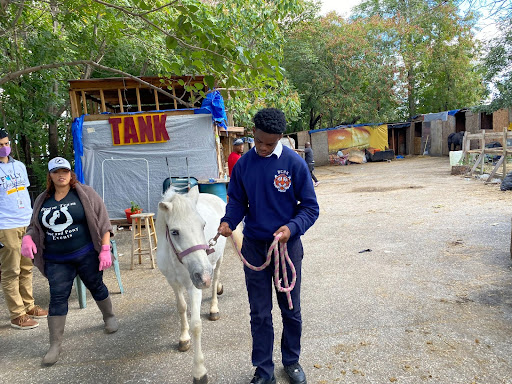 I never realized that a site like this was located a few blocks from the school. Many people have probably walked past it without realizing what is there. The overall trip was a good and memorable experience