STRIPES Students Party with the Stars

On Tuesday, October 19, several current and former STRIPES students from Belmont Charter High SChool attended an evening “star party” held by the Delaware Valley Amateur Astronomers (DVAA) in Collegeville, PA. (STRIPES is an integrated program at BCHS; it stands for STudying Real Issues, Places, and ExperienceS.) I went as part of my independent study of astronomy. Specifically, I want to know what moons are and how they form. I had come up with the question while researching how the universe took its shape.

I went as part of my independent study of astronomy. Specifically, I want to know what moons are and how they form. I had come up with the question while researching how the universe took its shape. The event took place in a dimly lit park, which was connected to a parking lot and a rarefactional center. There are about twenty people there of all ages. DVAA had telescopes set up and even a pair of binoculars to help us look at the sky. It was very cold and very quiet, probably due to the fact of it being night with no animals, minimal cars, and little conversation. 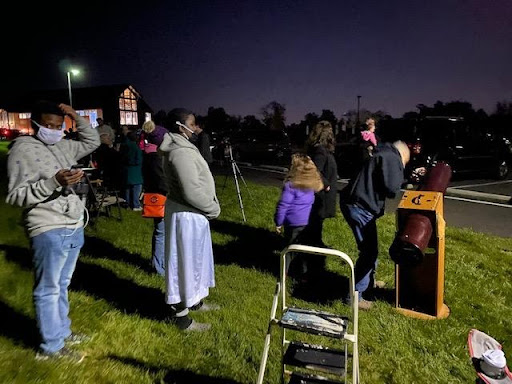 The people at the event were very friendly and welcoming. It was amazing to be able to use hundreds of dollars worth of astronomy gear. There wasn’t really one person in charge; it was many people sharing their telescopes and passions.  The people there were open to sharing their knowledge and talking to fellow people interested in astronomy. Some of the things I saw through the telescope were Venus, Jupiter and its four core moons, Saturn, the Moon, several constellations, and even the Andromeda galaxy. The planets we saw — Jupiter, Venus and Saturn — were visible to the naked eye, which was impressive. We could even watch Venus move through the sky to the point of no longer being visible at all, which really surprised me and made me really excited. I could also view Jupiter’s system with its moons orbiting, and it felt so surreal to see it with my own eyes. I also got to see the Andromeda galaxy. Sadly it just looked like a pale white dot, but it was still interesting that I was seeing something 2.5 million light years away, and seeing light that was 2.5 million years old. 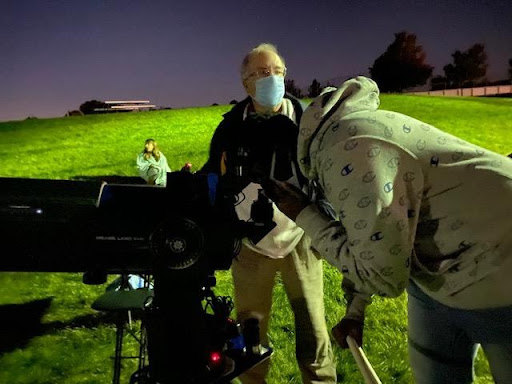 This experience made me wonder what was out there. I saw so much that I’ve never had the opportunity to see living in a dense city. It was so fun and interesting, and it really made me consider buying a telescope of my own. I also thought about moving to a place with far less light pollution, but that’s just a thought. I would recommend DVAA events to anyone interested in astronomy, but I also realize it isn’t for everyone. You had to be really patient at night in the cold — and sometimes you might not even be able to see anything because of clouds. However, when you truly get to see the planets of our solar system with your own eyes, you begin to understand what astronomy is all about.